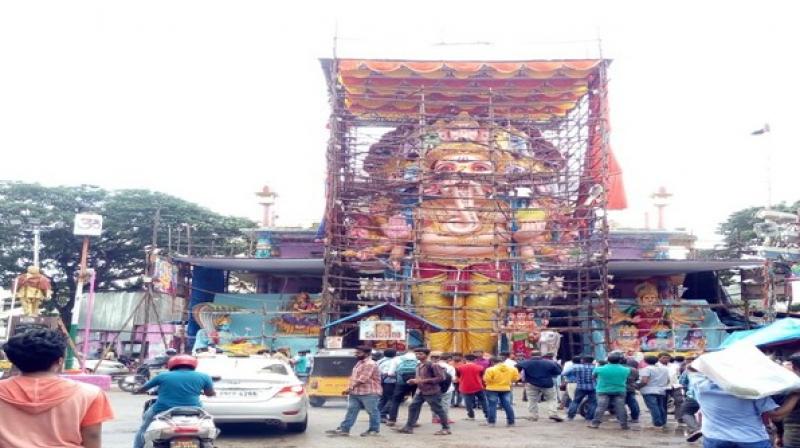 HYDERABAD: With 20 days left for the Ganesha festival, sculptors are pre-occupied making the first-ever clay idol of Khairatabad Ganesha. The idol, in the form of Sri Panchamukha Maha Laxmi Ganapati, weighing 45 tonnes, will be 50 feet tall when completed.

The idol on the left is of Subramanya Swamy while to the right will be Goddess Gayatri, according to the final design plans.

Ganesh Utsav Committee convener Sandeep Raj said that 1,000 35-kg bags of clay were procured from Rajasthan. Twenty-five tonnes of iron will be used, he said. The decision to use clay was to prevent water pollution when the idol is immersed.

Speaking to Deccan Chronicle, Raj said, “The main karigar has been called from Odisha as we have opted for a clay idol. Other artisans and designers are from Chennai, Andhra Pradesh and Maharashtra. Around 150 persons, including welders and carpenters, are toiling to finish the idol by August 25.”

Water colors would be used for painting the idols and the work would be over by August 30.

“It takes an extra month to make the clay idol. The budget shot up from `one crore to `1.5 crore because we had to use more iron and other raw materials,” he said.