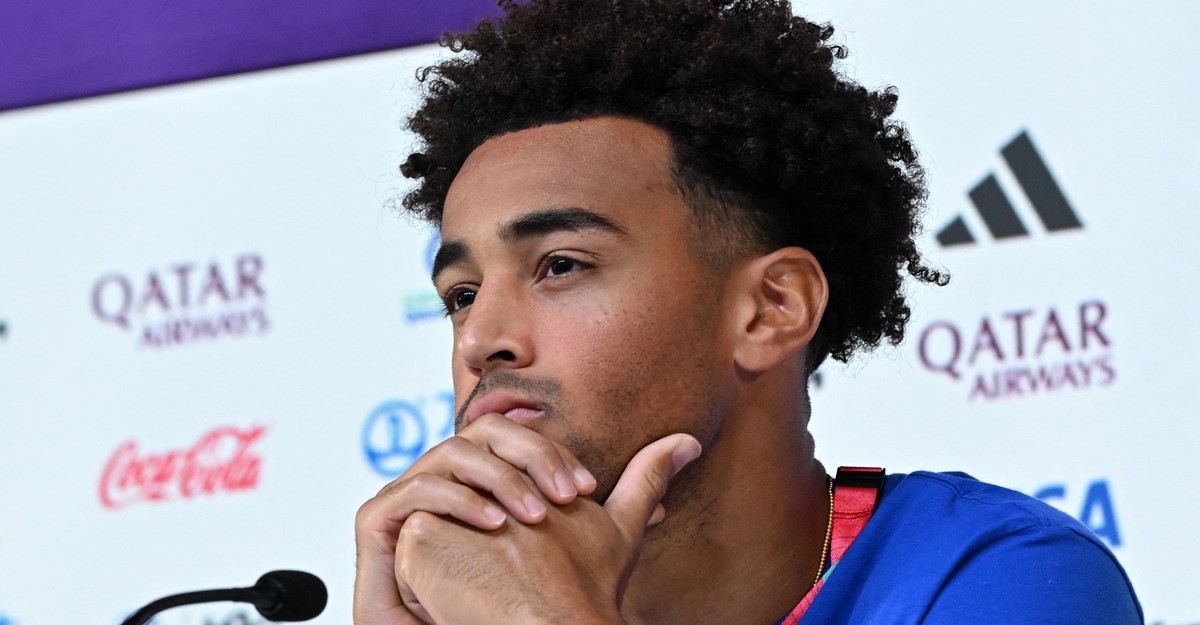 In a press conference yesterday, Tyler Adams, the 23-year-old captain of the U.S. men’s national soccer team, was chastised by an Iranian journalist for mispronouncing the name of his country (Adams pronounced it eye-ran as opposed to ee-rahn) before following up to ask whether, as a Black American, Adams felt uneasy representing a country that has a history of discrimination against Black people. Adams was characteristically thoughtful and measured in his response. “My apologies on the mispronunciation of your country,” he began. He continued:

Growing up for me, I grew up in a white family with obviously an African American heritage and background, as well. So I had a little bit of different cultures, and I was very, very easily able to assimilate in different cultures. Not everyone has that, that ease and the ability to do that, and obviously it takes longer for some to understand. Through education, I think it’s super important—like you just educated me now on the pronunciation of your country. It’s a process. I think, as long as you see progress, that’s the most important thing.

Adams, who has a white mother and a Black biological father but was raised in a white family, has an experience that’s distinct from that of most Black Americans. As a result, his answer to the Iranian journalist’s question might have a different shape than the answer of another Black American—or even another of his Black teammates with a different upbringing—might have been. That doesn’t make his experience any less legitimate; Blackness is and always has been heterogeneous.

The Black players on this U.S. team reflect that diversity: Tim Weah was born in Brooklyn to a Jamaican mother and a father who is currently the president of Liberia; Yunus Musah was born in New York to Ghanaian parents and grew up in Italy and England; Kellyn Acosta was born and raised in Texas, and his paternal grandmother is Japanese; Sean Johnson was born in Georgia to Jamaican parents; Sergiño Dest was born in the Netherlands to a Dutch mother and a Surinamese American father; Jedi Robinson was born and raised in England but has an American father from White Plains, New York; Shaq Moore was born in Georgia and moved to Spain when he was 18; Weston McKennie was raised in Texas but had a father in the Air Force and spent some of his earliest years in Germany; Cameron Carter-Vickers grew up in England the son of a man from Louisiana who played professional basketball, and his mother is from Essex; Haji Wright was born in Los Angeles to parents of Liberian and Ghanian descent; DeAndre Yedlin was born in Seattle and raised by a Jewish mother.

There are 11 Black players on the U.S. roster for this World Cup (a number that would have seemed unfathomable to me as a Black kid growing up playing the game), and their backgrounds reflect the plurality (and growing internationalism) of Black American life. Still, the question the Iranian journalist asked of Adams could have been asked of many of his teammates. It is one that is not unfamiliar to Black Americans of all stripes, who have wrestled with what it means to represent a country that for so long has—explicitly and more subtly—treated Black Americans as second-class citizens.

In hearing Adams, I immediately thought of one of the first Black American athletes who had to publicly wrestle with the relationship between their Black identity and their American identity. In 1936, the track star Jesse Owens—the son of sharecroppers and the grandson of people born into slavery—went on to become the first American track-and-field athlete to win four gold medals in a single Olympic Games. These victories came at a moment when the Nazi Party was ascendant in Germany; Hitler had come to power in 1933 and had laid an ideological foundation on claims of Aryan superiority. Owens’s performance at the Olympic Games in Germany demolished such absurd claims and undermined the phrenological junk science that Nazis were using to ground their burgeoning political project.

Reports soon followed that Hitler snubbed Owens after his win; some in the U.S. press latched on to these stories, though it was later revealed that Owens and Hitler “exchanged waves” in the stadium. Decades later, Owens went on to say that white Americans should be less concerned by how he was treated in Germany and pay more attention to the way he was treated at home in America:

When I came back, after all those stories about Hitler and his snub, I came back to my native country, and I could not ride in the front of the bus. I had to go to the back door. I couldn’t live where I wanted. Now what’s the difference?

Shortly upon his return from the Games, in a speech delivered to a Black crowd in Kansas City, Missouri, Owens proclaimed: “Hitler didn’t snub me—it was [Roosevelt] who snubbed me. The president didn’t even send me a telegram.”

After Owens, there was Muhammad Ali—then known as Cassius Clay—who won a gold medal for the United States as an 18-year-old at the 1960 Olympics in Rome. After he won the medal, the young boxing champion was ecstatic: “I didn’t take that medal off for 48 hours,” he said.

But only seven years later, when Ali was drafted—and refused—to serve in the Vietnam War, he spoke plainly as to why. “I’m not going 10,000 miles from home to help murder and burn another poor nation simply to continue the domination of white slave masters of the darker people the world over,” Ali said in a press conference a week before his scheduled induction ceremony. “If I thought the war was going to bring freedom and equality to 22 million of my people, they wouldn’t have to draft me, I’d join tomorrow.”

In 1968, the track stars John Carlos and Tommie Smith stood on the podium in Mexico City and lifted their fists—covered in black gloves—into the air. Smith later said, “If I win, I am American, not a Black American. But if I did something bad, then they would say I am a Negro. We are Black and we are proud of being Black. Black America will understand what we did tonight.”

To be sure, Tyler Adams is in a different position than some of the aforementioned athletes, whose successes were, largely, the products of individual athletic pursuits rather than team-oriented accomplishments. Adams is the captain of a team with players from a range of racial backgrounds. When he speaks in these press conferences, he is representing not just himself, but the entire group.

Born in 1999, Adams has also grown up in a different America than that of Owens, Ali, Carlos, and Smith. As he said during the press conference, there has been progress. This, of course, does not mean that rampant racism does not continue to exist. Black Americans experience both interpersonal and structural racism every day. Adams knows this. But he also knows that acknowledging progress doesn’t erase a recognition that there is still a need for more of it.

Adams’s response offers not only insight into how well he is able to respond to complex questions of geopolitical significance at a press conference the day before the biggest game of his life, but also an opportunity to consider the long history of Black players being asked about—and asking themselves—what it means to be a Black athlete representing America. Those answers will continue to evolve and vary depending on who is being asked the questions and the context in which they are being asked. But what I know to be true is that these questions won’t stop being asked anytime soon.