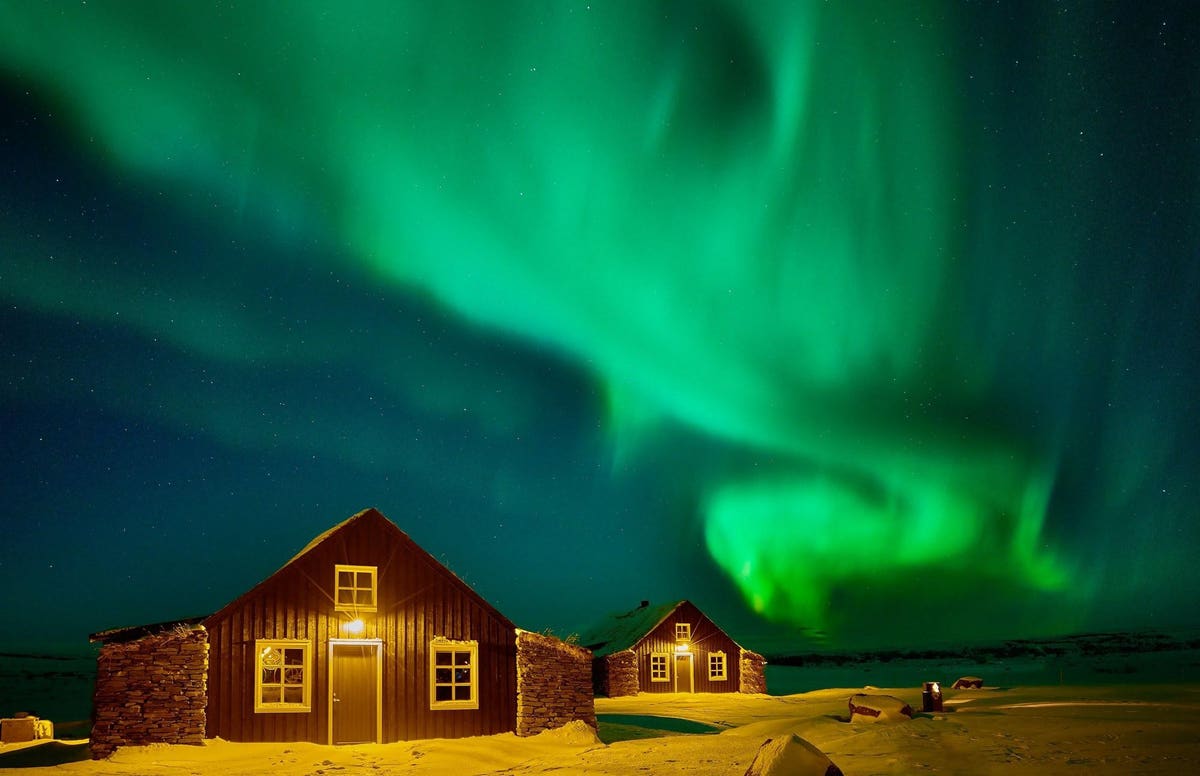 Iceland is synonymous with seclusion anyway as an island in the North Atlantic with rugged terrain and a sparse population.  But within that wild countryside, some hotels expand that sense of privacy even further. At Torfhús Retreat in Selfoss in the southern part of the island, the 25 rooms are enclosed in individual turf covered houses tucked into the rural landscape. It’s secluded but not inconvenient—a 90 minute drive from the capital Reykjavik and in the heart of the sightseeing rich Golden Circle. With dark skies unpolluted by area lights, it’s also a prime spot to take in the winter show of Northern Lights.

The overall tone here, apart from remoteness, is sustainability, authenticity, high quality but in a rustic, relaxed style. The traditional architecture in the 10 two bedroom, 646 square foot Torfhús houses and the 15 one bedroom, 312 square foot Torfbaer suites is inspired by Viking styles and constructed of local stone, turf and reclaimed oak and pine for the interior floors, walls, bedframes and (in the Torfhús houses) cabinets in the full kitchens. The furniture is also vintage, handcrafted and rustic as well but in a nod to modern times, there are Smart TVs, state of the art WiFi and Nespresso machines. And each house has a trademark Icelandic feature: geothermal basalt stone pools for soaking. The Torfhús houses have their own private pools, the Torfbaer suites share one between the three suites within each house.

The restaurant here, also located in a wooden structure resembling a Viking farmhouse, is the domain of inventive Icelandic chef Thorannin Eggertsson who creates a different five course tasting menu each evening composed of ingredients largely within a 10 mile radius. Salmon and Arctic char come from fishermen working nearby rivers with other seafood fished off the coast, lamb and beef graze on surrounding pastures and the vegetables and salads come from geothermically heated greenhouses minutes away. They turn up in dishes such as langoustines in garlic butter, salmon sashimi and seared veal with flakes of truffles often served with a theatrical flourish. And if dining within the restaurant isn’t unique enough, the staff can relocate dinners to other locations such as the greenhouses where the vegetables are grown or cowsheds overlooking the livestock.

Given the location, multiple activities in the area are easily arranged. Guests can snowmobile or hike over the country’s second largest glacier, Langjökull Glacier which guests can see on the horizon from the retreat. They can descend into the extinct volcano Thrihnukagigur 60 miles away or if it starts erupting again as it has since March, Fagradalsfjall Volcano in the Geldingadalir Valley 81 miles away. Much closer-eight miles away-is Geysir, the hot spring shooting thermal water into the air that lent its name to others around the world but is only intermittently active; its neighbor Strokkur picks up the slack, regularly shooting jets of water 100 feet into the air. Also nearby: the mighty Gullfoss waterfall, another significant sight in the southern region (but given COVID-19 restrictions, best to check that the viewing area is open that day.)

After touring or hiking the local sights and experiencing whatever five course surprises the chef has assembled, a perfect end for the day is a soak in the steaming geothermal pool back at the retreat. With luck, and a clear sky, it’s the ideal place to be as flickering green slashes appear in the sky.