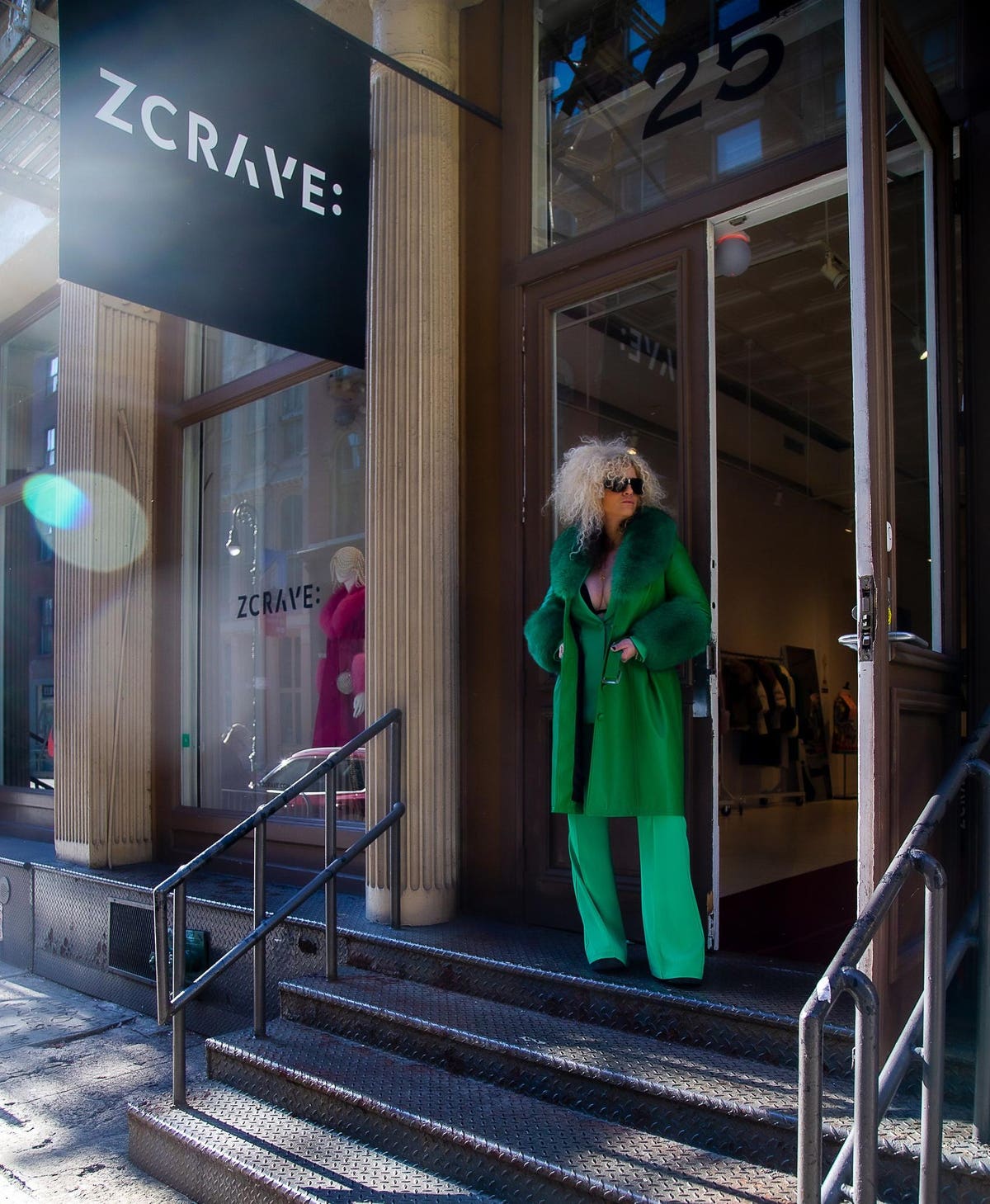 If one fashion brand defines being bold and extra, it has got to be ZCRAVE.

In other words, it’s a brand that defines being “Extra,” it’s for women who want to be photographed. The brand—which recently opened their flagship boutique in New York’s SoHo district—and is known for their signature pieces, like the F3TISH pantsuit, their blinged-out sequin dresses, or their faux fur winter coats.

“Women want to be bold,” said Zigdon. “And ZCRAVE is all about being bold. People come up to women and ask, ‘hey, where did you get that?’”

She is sitting behind a red velvet rope in her SoHo flagship on a busy Friday afternoon, where a flutter of women pokes through the spacious 3,000 square foot store, taking selfies wearing the brand’s faux fur or the power businesswomen suits.

If you want to be noticed as a woman at a party and be photographed wearing a standout piece, ZCRAVE is your brand. “Women say they feel confident and sexy wearing my designs,” she said, “and try to find womenswear in SoHo or on Madison Avenue that goes up to 5XL, which is what we carry here—its design by women for real women,” she said.

ZCRAVE all started as an ecommerce site in 2017, and with a background in branding and graphic design, Zigdon has helped build the brand into a multi-million-dollar empire with a flagship in New York City, which opened in March, as the brand celebrates their five-year anniversary.

Today, this female-founded brand has caught the eye of celebs too, with Christina Milian, Ciara, and Bella Thorne wearing pieces designed by ZCRAVE’s founder, Zigdon, as well as Elizabeth Woods, the mother of Jordyn Woods, and Kenya Moore, among other stars from the Desperate Housewives franchise. One favorite piece this season is the Fifth Avenue feather dress (below).

Usually brands start with retail, then turn to ecommerce, but for Zigdon, it was the other way around. The boutique—which is in an old, historic Gilded Age building built in 1867—is ideal for groups of girlfriends who want to roam the shop, buzzing with techno, and take selfies before a full-size mirror.

“I love SoHo,” she said, “it’s a discoverable spot, it’s eclectic and fun. The more you want to expand, the more you need the recognition, you need to be trusted by your clientele in Chicago who hears you have a flagship in SoHo”

She’s known for designing signature pieces like the F3tish pantsuit, which incorporate her cartoonish design characters, which call to mind modern art classics like Pablo Picasso—but seen through the female gaze. Her flat, 2D graphics depict women in scenarios—they look like they’re singing, eating bananas, flipping the bird, dancing, and raising their fists in protest abortion laws—all brought together into a balanced, minimalist composition. She calls it a visual diary of her life.

“In my world, my designs are inspired by food to sex, things you crave,” said Zigdon (the brand’s name comes from her putting “z” representing the first letter of her surname alongside the word ‘crave’).

“Bringing together all the elements of a woman’s desire, what makes her strong and independent, and go towards what she wants in life, is what we’re doing here at ZCRAVE.”

ZCRAVE offers over 400 different designs that want high-quality designer fashion on a budget—and standout pieces you can’t get at a department store. “It’s worth it for women who come in specially looking for art-centric design,” said Zigdon. “I’m really inspired by art. I collect art, I’ve been a big art fan since I was a kid, and Israeli artist Igael Tumarkin was one of my mentors.”

“The way my journey started, everything comes from art,” she adds.

The looks are what you would wear to stand out at New York Fashion Week, on the dance floor. “A lot of clients say, ‘this is so fun,’ but it’s just who I am,” she said. “It’s a playful approach.”

Next up, ZCRAVE is looking to open boutiques in Los Angeles, Miami and Nashville (“which is all about parties right now,” said Zigdon) and then, Europe.

Her secret to success is simple—she loves her job. “A lot of love. I know it sounds kitschy but if you really love something and you really believe in yourself, give yourself that opportunity to grow,” said Zigdon.